MHEV, HEV, PHEV, BEV let's look at what they mean and the solutions developed by König for the new generation of vehicles.

This widespread use has led the automotive sector to be regulated from various points of view, including safety and environmental impact. In this article, we focus on the latter.

The emergence of the EURO classification for vehicle emissions dates back to 1991 and since then, vehicle manufacturers have been working, more or less intensively, on solutions to reduce the environmental impact of their vehicles. At the time, they were mainly talking about green petrol and catalytic converters.

Towards the end of the 1990s, there was a real boom in diesel engines, which at the time were certainly more common in commercial vehicles and trucks than in passenger cars. This was all thanks to the Common Rail system, which made it possible to use engines with smaller displacements, reducing fuel consumption and offering brighter performance.

In order to limit emissions, after the early 2000s, diesel-powered cars were equipped with a DPF (Diesel Particulate Filter), which was used to collect particulate matter inside a filter on the exhaust after the catalytic converter.

About a decade later we see the appearance of additives to further limit emissions (AdBlue) that were already used on trucks and buses and have now become mandatory on all diesel-powered vehicles.

In the last decade, however, we have witnessed a rather radical change in strategy compared to what had gone before: manufacturers have started working on mixed-fuel vehicles, i.e. those that combine an internal combustion engine with an electric motor and its battery.

If we take a snapshot today, we see an increasing number of cars, SUVs and commercial vehicles equipped with electric power, in some cases in addition to the classic petrol/diesel power supply, in other cases exclusively.

The electrified vehicles that we find in the offers of the various car manufacturers are classified by acronyms that often confuse the public, so let's try to clarify them by looking at the main types and what they mean.

MHEV, HEV, PHEV, BEV what do these terms mean?

In common parlance, the term 'hybrid' is used to define a range of vehicles equipped with an alternative power supply to that provided by the classic internal combustion engine. At the same time, vehicles are classified according to the degree of electrification present in the vehicle into four macro-categories, which we present in ascending order of electrification.

How the electrification of vehicles affects the choice of snow chains

BEVs, especially new-generation premium vehicles, are capable of delivering a considerable amount of torque at lower RPM. In other words, while a petrol engine (not turbocharged) tends to deliver low to medium torque and reaches maximum power at high RPM (above 4,000 RPM), the BEV engine delivers maximum torque at low RPM. To put it bluntly, the modern BEV gives everything right away.

As far as the weight of BEVs is concerned, although better distributed than that of standard vehicles, it is significantly higher than that of vehicles with internal combustion engines, vehicle/category being equal.

The weight increase does not only affect BEVs but also PHEVs as they are characterised by greater mass than the internal combustion engine vehicle due to the addition of the electric motor and its battery.

In short: lots of torque, immediately available, and more mass.

Where to fit chains on electric vehicles

As with internal combustion vehicles, the vehicle manufacturer indicates in the owner's manual the axle(s) chosen for the installation of snow chains and any recommendations and restrictions in terms of models.

Therefore, there are no crucial differences compared to standard vehicles.

If in doubt, please check the information in your vehicle's owner's manual or contact your car dealer.

From our experience, we see that most manufacturers recommend the installation of snow chains on the rear axle of most BEVs, even when equipped with all-wheel drive. At the same time, there is no shortage of cases of front-wheel drive electric cars where the front axle is, by definition, the only one that can be fitted with snow chains.

With a constant eye on the future, König has developed and adapted its range of consumer snow chains with dedicated products that take into account the technical requirements of electric vehicles and consumer preferences in terms of ease of use and functionality.

Let's see what they are. 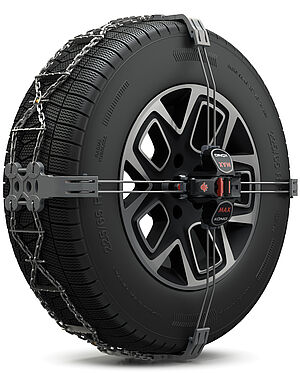 Inheriting the basic characteristics of the K-Summit family of products (external mounting, attachment to the wheel nut, automatic tensioning, adaptability to a wide range of tyre sizes), the König K-Summit MAX was developed to meet the needs of BEVs characterised by a lack of space between wheel and suspension. Thanks to the reinforced tread, the chain offers greater strength on BEVs and thanks to the deep tread plates it fits better on wide tyres, guaranteeing better performance.

For more details and product info click on the link: 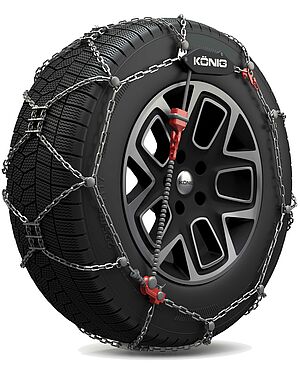 The König XG-Cross represents the best compromise between footprint and performance, thanks to the triple welded bars that improve the tread geometry, guaranteeing greater grip on heavy and powerful vehicles.

For more details and product info click on the link: https://www.konigchain.com/explore/detail/koenig-xg-cross-dedicated-to-compact-suvs-and-crossovers/ 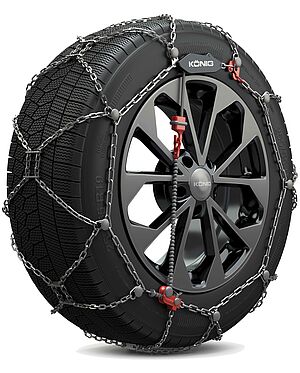 The XG-12 Pro represents the best compromise between footprint and performance, thanks to its tread made with short-pitch links, welded bars and only 12mm overall dimensions. The chain's resistance is proven by its double homologation (V5117 and V5119) for both light and heavy vehicles (over 3.5ton).